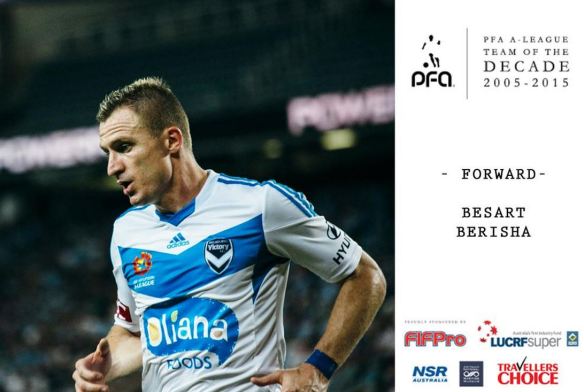 Some might love him, other might hate him, either way everyone in Australia knows who Besart Berisha is. The Australian A-League turns 10-years-old this year and to celebrate their 10-year anniversary every A-League picked out a ‘Team of the decade’ line-up. Which Kosovo born striker did they think was the most influential one and made it to the official list? Well Berisha of course!

The tale of Besart Berisha began in Kosovo where he was born on a hot summer’s day back in 1985. He started playing football in the streets of Prishtina but moved to Germany with his family at an early age. His upbringing was difficult growing up in a poor Berlin suburb. As his family were not wealthy the need to score was big he said in an interview with the Guardian. A so he started doing so, playing for Tennis Borussia Berlin club he was the top goal scorer in the lower divisions. This caught Hamburger SV’s attention and he packed his bags and moved to play with the big boys in Bundesliga.

However the years that followed were anything but good. 2006, a couple of months after his 21st birthday he scored his first Champions League goal and ten days later another Bundesliga goal for Hamburg SV. Shortly after he left HSV. He had a mediocre career with teams around Europe and injuries made the struggle to score even harder.

One might compare him to Swedish starlet Zlatan Ibrahimovic. Another striker with Balkan roots who also had a tough upbringing. They both share an attitude that have often gotten them into trouble but they never stop producing goals and collecting awards.

While playing in another German team, Arminia Bielefeld, one of his team-mate mentioned that his father was the assistant coach of an Australian team named Brisbane Roar and that’s how the two sides got to know each other. Berisha eventually
decided to try his luck outside the European border and in August 2011 Brisbane Roar announced that they had signed Berisha. This also meant that Berisha would not return to Albania’s National Team. Australian supporters were not so thrilled to have an unknown striker with a not so impressive resume join their team while the rest of the Australian football crown shrugged and said, “Berisha who?”.

It just said click and the ball was put in motion. Berisha scored his first goal in Australia on October 15th 2011 and the goals kept coming. A fortnight later he first wrote history as he scored the fastest hattrick in the A-League history. It took him six minutes and he actually scored four goals in their 7-1 win against Adelaide United. That was when people first started noticing Berisha. “Who is he?”.

Besart Berisha scored three goals in six minutes in 2011, this makes it the fastest hattrick in the A-League history.

By the end of the season he had scored a total of 19 goals (in 29 games), Brisbane won the Premier’s plate and also won the Grand Final. Berisha added another two goals after scoring twice when they beat Perth Glory during the final. The cruicial 2-1 goal was through a penalty at the very and end even to this day Perth claim that Berisha dived to get that penalty. During the season he made several headlines. He had fought with several players both on and of the pitch but they could all agree that he sure did know how to score. Berisha collected several awards that season including ‘Top goal scorer’ and ‘Player of the year’.

In Berisha’s second season he only scored 14 goals, just as many as Juventus legend Alessandro Del Piero who had just joined the league and this drew more attention to the league. Brisbane finished fifth, just managed to clinch a spot in the elimination finals but lost the semifinal against Labinot Haliti’s Western Sydney Wanderers. During the summer Manchester United came to visit to take on Australia’s all-star team and Berisha was not chosen to play at first but coach Ange Postecoglou, Berisha’s former coach, decided to call up Berisha as well. United won 5-1 and Berisha was the man to score the only goal for the Australian side. United also brought along youngster Adnan Januzaj who made a 20 minute long appearance at the end.

The season of 2013/2014 was Berisha’s final one with orange dressed Brisbane Roar. Injuries and two red cards did not prevent him from scoring 13 goals. He finished the season the same way he started it in Australia. By winning the Premier’s plate after the regular season and also the Grand Final, which actually was against Haliti and his Wester Sydney Wanders. The last picture we remember of Berisha is one where he stands quietly in the locker room admiring his jersey that he had been wearing for three years. A jersey which he wore while scoring 50 goals (48 in the league + another 2 in the Asian Champions League) making him the all time top goal scorer for Brisbane.

The summer of 2014 Berisha was once again included in Australia’s all-star team, however they lost 2-3 against Juventus.

When Berisha first announced that he was going to leave Brisbane we were many to believe that he would return to Bundesliga but we were disappointed to hear that he had decided to stay in Australia. He moved south instead and signed with Melbourne Victory. At that time City Football Group had re-established Melbourne Heart to Melbourne City and had World Cup winner David Vila come in to market the team. This would mean that Berisha and Villa would clash in the Melbourne derby which was a game to watch.

In Melbourne the goals did not stop there. He has currently added another 13 goals to his Australian resume, the last one was just this weekend. How many league goals has he scored now? 61! This makes him the third top goal scorer in the A-League ever and this is his fourth season in Australia.

Briefly explaining, Australia’s A-League has only been around for ten years and it replaced the National Soccer League in 2005. Australian football almost got extinct since players left to move abroad which caused sponsors to withdraw and so on. With the new league Australia went all in order to attract viewers so that people would go and see the game. A fresh start where they even signed big names like Del Piero and Villa who took the league to a higher level. But then there were unexpected signings, like Besart Berisha, who has made himself an A-League profile.

In four years Berisha has achieved things players could only dream of. He has won the Gary Wilkins medal, been voted player of the year by the players twice, won the golden boot, won the Premier’s Plate and the Grand Final twice, scored the fastest hattrick ever, and is currently the second runner-up to become the all time goal scorer in the A-League history ever. So when the Australian players were asked who the most influential striker was, the name Besart Berisha was answered by many.